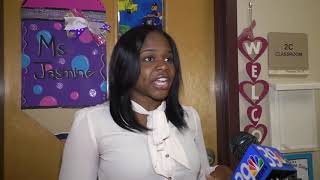 With the preschool waiting list growing and extra state funds the Jackson Madison County School system decided to add a pre-k class to Andrew Jackson. JMCSS added more than 4 pre-k classes across the district to serve an additional 100 pre school students. But Andrew Jackson was the only school who added its first pre-k class. Mary Myers, Leader of Early Foundations, said Andrew Jackson was a great choice. "Andrew Jackson , is just a wonderful place because we had such a need
1
2345