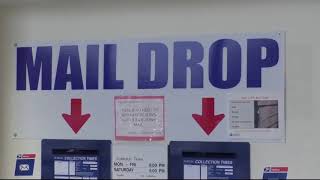 "The day has been pretty steady, our busiest day was yesterday but today has been pretty steady for people sending off packages" according to Tiaye Owens, one of the sales associates at USPS. Its the busiest time of year for the united states postal service. USPS estimates they will deliver over 200 million packages by December 24th and six million on Christmas Eve alone. Workers at the post office branch at Dr Martin Luther king Jr drive say they don't do much prep for the w
23
4
56